Posted by Aedan Will in SPANISH 2 - Moran - E on Friday, January 22, 2016 at 1:47 pm
For this project we had to write about a passed family member in our lives. For me I didn't want to do a family member so I did my cat who had recently died. After we did a write up we had to make a video in spanish explaining your person and why they were important to you.

Just a few months ago I had to put my cat to sleep. She was very sick and you could tell that she wasn’t at all happy. She wouldn’t eat. She wouldn’t drink. And she wasn’t using her litter box at all. She wouldn’t even clean herself. So we decided to take her to the vet. It turned out that she had a hole in the roof of her mouth. The veterinarian told my dad and I that mucus was dripping down from her nasal cavity into her digestive track causing her to become sick. He also told us that she possibly could have a tumor in there as well causing the hole to not properly heal. If we were to give our cat treatment it would have put her in a lot of pain, it would have cost thousands of dollars, and we didn’t know how many years she had left in her either. So we had to make the very tough decision of putting her to sleep. This was a extremely sad moment in my life that I will never forget, especially since I chose to be in the room while she was put under.

Her whole life she couldn’t see very well because she was born cross eyed. Even though she was cross eyed she had deep blue eyes with what looked like very dull sparkles of red and yellow. Near the end of her life her vision worsened to the point where she could barely see to the point where she could only see the distinction of shapes right in front of her. And on top of that her hearing was going as well. You would have to be at least 5 feet away from her so that she could hear your voice.

Every night in the middle of the night she would yowl as if she was lost in hallway and couldn’t find her way to my room. I would have to loudly coax her into my room so that she would stop. Sometimes she wouldn’t even come into my room though. So I would either have to hiss at her until she would go away or go get her and bring her back into my room.

Every day after I would come home from school she would hop up on my lap and stay there for as long as I would let her. She would purr up a storm and feel like a warm puffball laying in my lap. She would also come and snuggle up next to me in bed at night. She had a thing for getting as close to your face as she could. Sometimes to the point where she would be directly on your pillow. She was always just happy to be around people.

I decided to use my cat as my topic for this project because she was a very big part of my life. She was always there as long as I could remember even when I was little. Infact my dad had actually had her since before I was even born. In all my memories of my dad’s house she was always laying on the couch, someone’s bed, or someone’s lap. She wasn’t a very active cat and would never play with a toy either. She didn’t even care much for catnip. But she would always cheer you up by laying on your lap if you had a bad day. Her climbing into your lap and laying there would always relieve you of stress and anxiety.

My sugar skull reflects my cat because it is painted red, yellow, and blue to represent the colors of her eyes. These colors represent her eyes. Even though her eyes were very blue I could always notice very dull sprinks of yellow and red in them as well. I decided not to include any gray on my skull because I never felt that the color of her fur fit her personality even though it was a very pretty tone of grey.

Día de los Muertos has made me realize that we shouldn’t mourn the passing of our loved ones. Is that what they would have wanted? For us to cry over them? For us to only think that we will never see them again? I personally don’t think so. I think that they would have wanted us to celebrate all of the good times that we had with them. To remember who they were and what they meant to us, what the did for us, and how they were apart of our lives. To cherish the time we were able to spend with them. I will always remember my cat fondly, And I will never forget her. I hope that she is in a better place and isn’t in pain any more. Her name was cat and she lived to be sixteen years old. 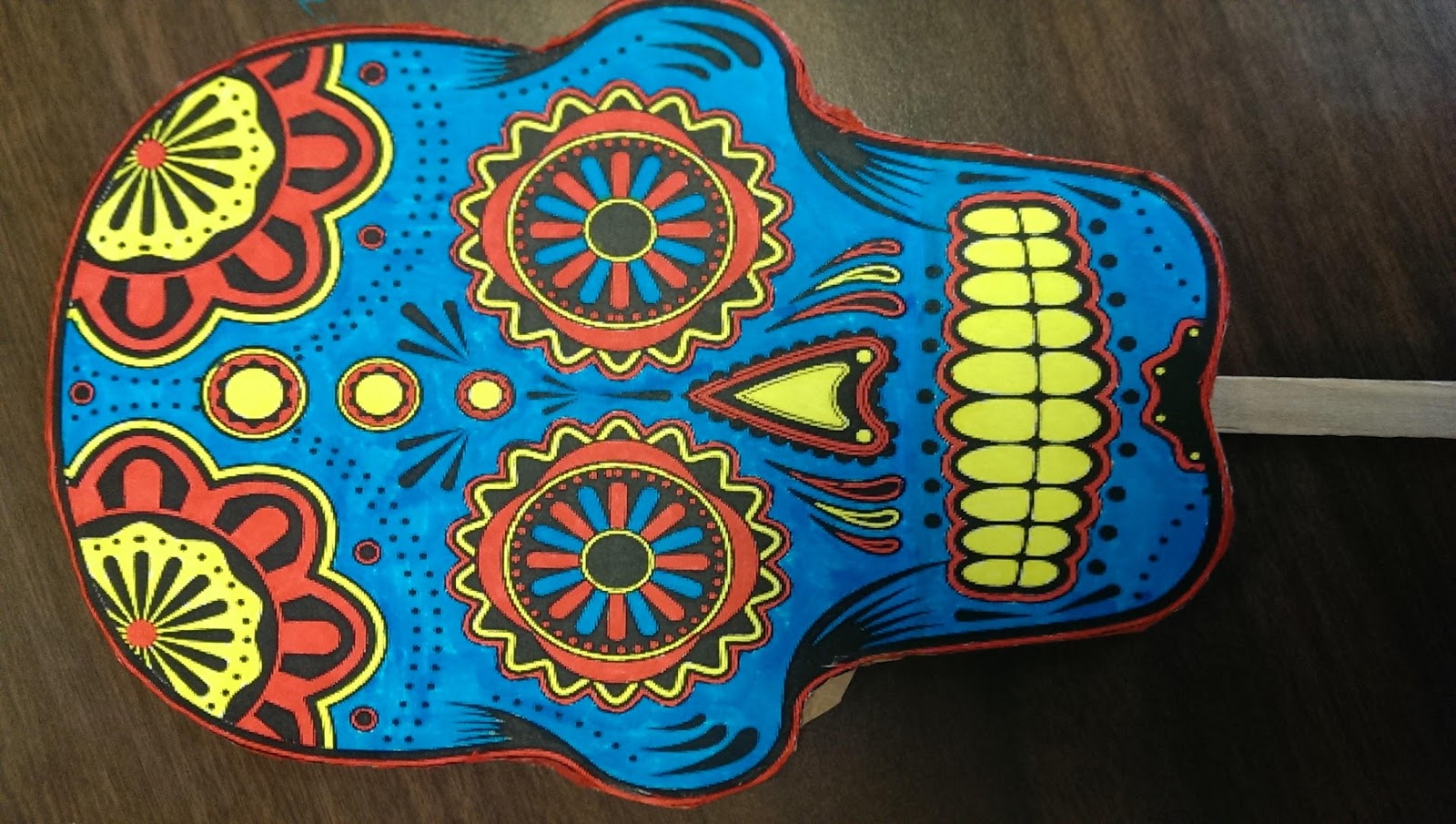