This is a reflection of the fast plants project made by: Alexander, Bahiya, and Samantha. As my teammates and I looked at the new generation of plants while they grew everyday, we made a few small predictions that we thought would have been passed from the parent seeds to the new baby seedlings. One of the predictions that I remember was that we thought that at least one of the ST/ NP plants will grow a purple leaf, since two of the four parent plants grew the same leaf over the course of its life. With much accuracy, we found out that it did in fact happened, and something else as well. Our new ST / NP plant had not only grown two purple leafs but it also had half of the stem in the same color. Meaning that the trait was there in a more abundant state than in the parent’s. As time went one, we felt that some of the stages of the newer generation were faster, while others stayed the same as the parent. For example, the early stages of the seed having grown a bud or small root system was faster in the newer F2 generation. Not only that but the last stage of the plants preparing to die for the new seeds was also faster than the first generation. That said, we do think that half of the reason for the plant’s death coming faster could had been due to the fact that they weren’t watered as often as the first generation. Though both generations had a root system, as well as gotten supplied with water from the shells they were in. The first generation also recieved water from outside sources every so often (every class day), while the F2 generation, only received water very few times (from outside sources). I think that this might had hindered or fasten the last stages of the plant but apart from that, everything else was normal. The plants looked healthy, they bloomed and they even were more colorful than before. As the plant grows, temperature, water absorption, and other factors can affect the plant’s genetics in order to adapt to a better situation in said environment. For example, if a plant experiences a draut and survives- the “experience” could potentially change the plan’ts genes through a mutation (if it happens) and change the way the plant reserves water or adapts to the situation. This new mutation can then probably be seen through the phenotype of the plant (what can be seen) as a change. In the end, the project was very enjoyable, and though the project did took a long time, it was a fun time to experiment with the different generations and seeing how they changed, and acquired traits from past generations. 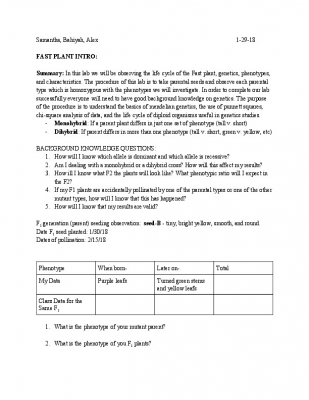 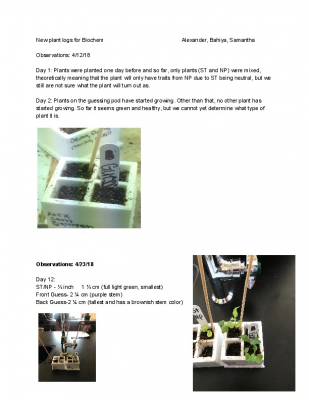