For the Dia de los Muertos project, there were five separate components that the project consisted of. The general point of the project was to create something in remembrance of a deceased relative of mine; in this case, my mother’s aunt Aída. For the first one two components of the project, I created a sugar skull and decorative mask that were meant to be symbolic to my aunt. For example, I chose a mask with nature because she had an eye for nature and enjoyed nature. The third and fourth components were written pieces about my aunt’s life and fifth was video which included a eulogy and pictures of her and family.

My mother’s aunt Adelaida passed away last summer after suffering from alzheimer's for years. I didn’t really know her when she was still lucid, but she meant a lot to my mom. So by extension, she meant a lot me, too. I decided to create my sugar skull in remembrance of her because I feel as though she played an important role in keeping the family together no matter what, she really tried. One of the things that I remember from the family gathering that occurred after she passed away is how a lot of people kept repeating the same things about her. They continually went on and on about she was truly the heart of the family and how she would want nothing more than for everyone to continue being family regardless of the circumstances we may find ourselves in. I never really meet her, but that’s not at all to say that I never knew her. The way that my family would talk about her, I feel as though I might as well as been watching her life story. They would talk about how she loved to cook family dinners and dancing with Tio Mario at family parties. They would talk about how she would always offer whatever advice she had to give and how she always insisted on helping others, even if they didn’t think they needed it. And that’s another reason why I decided to create my sugar skull in remembrance of her; I wanted a reminder of these little moments, because at the end of the day, all these little moments ultimately changed lives. My sugar skull wasn’t really all that complicated; it just had a few things and the reason for that is because that’s essentially what she tried to do for others--make their lives as simple as easy as possible. After finishing the sugar skull, I realized that leaving the white space also connected with the the fact that the majority of her intentions were pure, she really wanted to simply help others and to have them do the same. With both the sugar skull and the mask that I created, I tried to make the most noticeable and notable feature the eyes. On both objects, there are bright red flowers in place the eyes which are supposed to represent the perspective which she chose to look at life from. Flowers have always been something that I’ve connected with beauty so it just made sense to include them because one thing I know for a fact about her is that she ALWAYS tried to see the best of people and see the beauty of things. That was one of the most important lessons she tried to impose on the family, so I didn’t want to have anything distract attention from that main aspect. The feathers that are on the sugar skull are meant to be angel wings, but they are also representing the fact that she was always “as gentle as a feather”. The gold which I also included on both objects was meant to showcase her bright personality, as well as her golden heart. As I mentioned before, she cared deeply about the welfare of others, family or not. Whether or not she was perfect is up for debate, but it went without question that she was truly a good person at heart. She definitely fit the qualifications for having a heart of gold. I remember standing quietly beside my mother and my sister at the viewing watching lines and lines of people filing in. Admittedly, I was a bit confused because there was a large portion of those who I did not recognize from the family gathering. Then it struck me--these were people who she helped in some way, these were people who she touched and people who were her family too, even if the did not share the same blood. Even after death, there she was, bringing people together with her heart of gold and limitless kindness. She turned strangers into friends and friends into a family that would only continue to grow. On the mask, I colored the skull blue in order to represent the calm and the quiet. She wasn’t one to advocate conflict because she felt it was unnecessarily destructive and she often was one of the few people that could defuse tension when there were family problems actually happening. I would say that the main way “Dia de los Muertos” opened my mind up to celebrating the passing over a loved one is through creating physical representations such as the sugar skull and mask. It’s just something I wouldn’t have thought of, but I feel like those things really bring back the reality of it all. 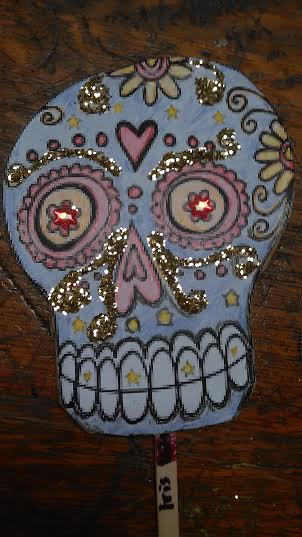 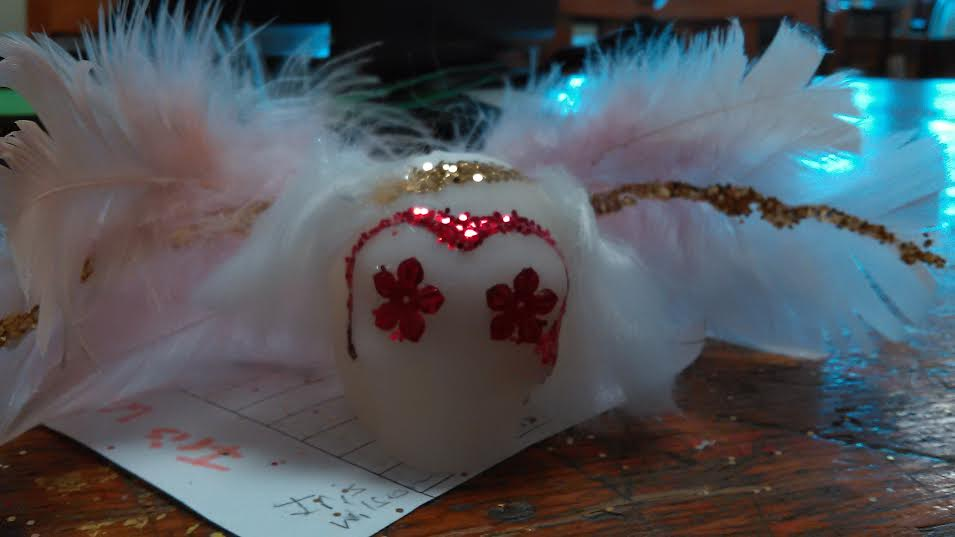