Posted by Talib Coffield-Zaboor in Statistics · Isakowitz · A on Friday, January 27, 2017 at 5:52 pm
http://www.youtube.com/watch?v=uyCzSrf-hhk 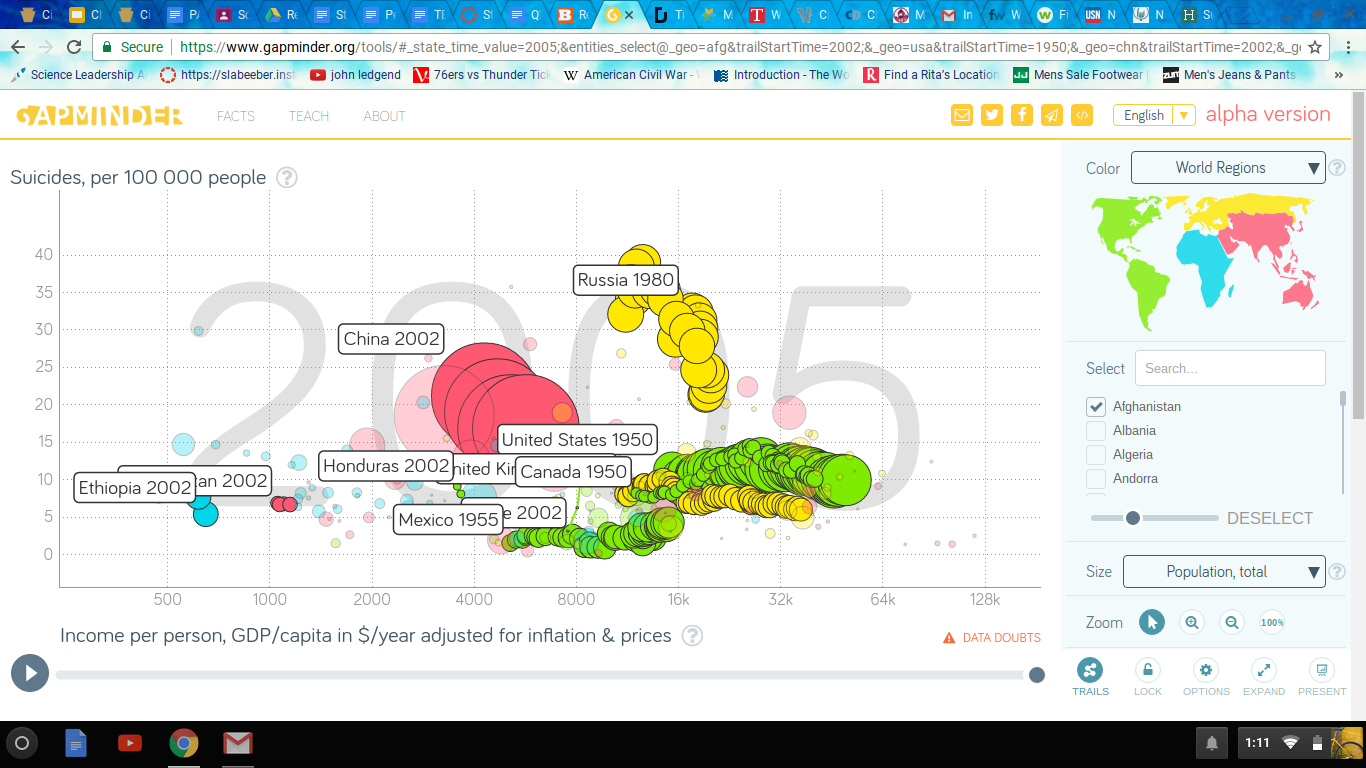 This proves that many people think that there were massive amount of suicides within the low income countries. However, based off of Afghanistan and later research, I can say that this rate is kind of low. Still I wonder to myself why are there 5.4 per 100,000 suicides still? Many of the suicides that happen in Afghanistan mainly come from women who have been forced into marriages, that is rape victims, and that is victims of domestic violence. Based off of “Report: Suicide Deaths in Afghanistan Higher Than Murders, War Deaths Combined by Edwin Mora” Looking at the graph you see a tiny increase in the amount of suicides of 10 people from 2003 to 2004. Suicides are bad no matter how much the number of people are, however looking at my graphs and correlating it to other resources has enlightened me. There are not as many suicides in low income countries than there is in middle or high income countries.

High income countries are what you can call the wealthiest. The country that has the most money, but does that mean the more money higher the suicide rates? Like many articles I have read for instance “ Why Are Suicides More Common In Richer Neighborhoods” by Josh Sanburn have said that most suicide rates come from people with more money. Now this may be talking about neighborhoods or people,  however neighborhoods coexist within a country, and people coexist within the neighborhood which will ultimately means the same thing. Now based off of graphical studies ( Figure 1)  I have seen that in many of the wealthiest countries I researched there is not an over exceeding amount of suicides.  Reading the article ( Why Suicides Are More Common in Richer Neighborhoods )you would think that Suicides basically only come from those people who have a higher income and nowhere else really. However, I found that to not be true. I have found that  suicides are high in high income countries, but they do not have the HIGHEST suicide rates like many acclaim. United States was the richest country of the countries I researched. I found that the United States have an income of 15,300, while it has 11.2 suicides per 100,000 people in the most recent year: 2004. ( Record: Figure 1 ) It has been made clear that STILL high income countries don’t have the highest amount of suicides, but they still have a pretty large amount. Suicide rates have jumped tremendously in the last 30 years according to “U.S. Suicide Rate Surges to a 30-Year High” by Sabrina Tavernise. Women in their middles ages tend to be the biggest group that suffer from suicides. I will say it affects women in their middle age the most normally during this time Women start to become mothers, go though manipulate and it creates a mid life crisis. This is what leads many Women to suicide. Through research I have gathered, especially in the United States who has the highest income suicide rates come from mid life crisis. Not because so many Rich people get tired of their life as Josh Sanburn implied in his article. Suicide rates are high in The United States, but they are not high as one other country.

China is a middle income country that has an income per person of $5,680. The suicide rate however is 16.9 per 100,000 people. As I was hinting in my other graph analysis’s, suicide rates are the highest in the MIDDLE income countries. Now this is surprising because many other articles have swore up and down that High income countries, and low income countries have had the highest suicide rates. ( According to sites below. ) While in my research I have seen that that is not the case, it is the total opposite in fact. China is one of the highest suicidal countries in the world. ( Figure 1 ) It mainly comes from Women as it does in many other countries. Although, the reasons behind it is different. Women in China tend to commit suicide because many women are stressing, and people have diseases such as bronchitis and cancer. That causes women to end their life because of the pain and infliction they go through. This is shocking to me because so many articles I’ve read has said middle income countries aren’t really the ones affected by income. I personally think that this happens in middle income countries because the middle tries to live a higher income life acting as if they are rich, while kind of in reality many people still have an income that relates more to the low income pool of things. This makes a lot of sense, because they seem to stress between the two lives of high income and low income. It makes people become stressful, which may lead to being overwhelmed that may cause suicide. Along this graph I was able to see that the income level with the most suicides come from a middle income level instead of low or high.