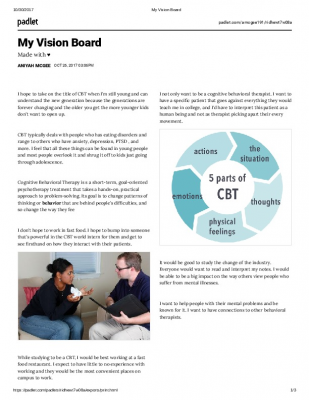 I created this work because I felt that it would be interesting to create a picture using only 3 colors. It was also cool to see how 3 colors could mix into many more. My overall work is disappointing. I think it came out a sloppy mess and that the viewer of my painting won’t be able to see my vision. I was hoping to achieve a more uniformed look, but instead it looks thrown together.

I would hope that my viewer could see something in the painting that I can’t. The lighter parts of the portion are supposed to represent the good sides of the butterfly and the dark parts are supposed to represent the bad parts that the butterfly has to overcome in order to get to the better parts of his life. My current work doesn’t relate to my previous work. I think that each pieces of my art are different and doesn’t reflect off of each other.

My painting doesn’t fit in with contemporary art because it wasn’t meant to be put in that category of art. The process I worked was first I did a grid of colors and mixed blue with blue, red, and white. Then I mixed white with white, blue, and red. Then I mixed red with red, blue, and white. In some parts of my painting the colors mixed more bluntly than in other parts it clashed better into a new color. My art reflects the world I live in because in the center, the butterfly is bright, but all around it is not so bright, so it’s like the environment you live in doesn’t affect who you are.

My art would make an impact on the world because it would make people realize that they are not the people who are around them. One of the certain techniques that was essential to the piece was the dotting I did around the butterfly. A new technique I experienced with was mixing paint to form something different and use them together on a painting to make sense.

In conclusion, my painting didn’t really go as I had planned, but I hope the viewer sees something in the painting that I didn’t.
Posted by Aniyah McGee in Art 2 · Hertz · b1 on Tuesday, January 10, 2017 at 11:07 pm

I created this work because the art project that I chose focussed on textures and I felt that eye sketches demonstrated texture in artwork nicely.  My vision changed throughout the project because I was not sure what I wanted to do, but for the drawing I chose, my vision was to have an eye that showed a wild, fierce, look to anyone who stared at it. I felt it was challenging because my drawing consisted only one eye.

I think my art communicates that the eye of the beholder could say many things even though it haven’t spoken at all. I think I achieved a piece of artwork that means different things to different viewers, but it says the bigger picture states the same. My current work relates to my previous work because I think my previous work has been very technical. Even the color wheel that we did previously had a technical design to it which was the dream catcher. I think my work mostly relates to Cindy Sherman because most of her portfolio is in black and white I feel like her art is very technical like mine. The process for my work was not like others.

I switched through my materials from choosing to draw with regular pencils or charcoal pencils, even though it was more difficult I chose charcoal because it looked nicer. It was very hard making sure the charcoal doesn’t smear and even so, it still looked smeared in the end. Sources for my inspiration were pieces of artwork that I’ve found off of various websites, but the artists were anonymous or unknown. Most of the pictures I’ve seen came from Pinterest , so I couldn’t really find the real source of the artwork.

My artwork reflects my life because it reflects what want my personality to be like. I feel that the eye gives off a fierce “don’t mess with me” kind of look and that is a personality I want to portray in life. I don’t want people to fear me , but I do want people to know me as the girl that gets what she wants by hardwork and determination. My work could influence the world because it could help women see that they could be this determined girl in my artwork and don’t have to back down from a fight when the times get rough. Certain technique is important to the artwork because I feel that if I made a mistake in the eye itself then some people would get confused on what the parts of the eye were, like in my eye there is a reflection of a light in it and I feel like it could easily be mistaken for something else. A new technique that I experienced with in my project was working with charcoal. I feel that next time I use it I will be able to handle it more properly when moving my artwork into my backpack so the pencil won’t smear into my other papers and around my artwork

In conclusion, I’m glad I did this project because I feel like it wasn’t too difficult, but it did present it’s challenges. Also, I feel like since I made did this project it gave me an idea on which project I wanted to do next because it was certain parts of the projects that I enjoyed that I found I would do more of in some of the other projects.
Posted by Aniyah McGee in Art 2 · Hertz · b1 on Monday, October 31, 2016 at 9:54 am

The object of the project was to see how colors mixed and see how three primary colors could mix into many different colors. We could have done an ordinary color wheel, but I decided that I wanted to do a dream catcher because it had a lot more parts and it was more complex than a regular wheel.

My overall vision when I started the project was to do something different and unique, but make sure it was easy enough to incorporate all the colors of the color wheel. Some of my colors like blue-green and yellow-green came out looking a weird looking gray. I think my audience will react in a positive way because my drawing was very unique and where I placed the colors was thought out. My current work relates to my previous work , because in 2nd grade we used to do free sketches , and when we started our project in this class, we had the choice to do any kind of sketch that we wanted. My art fits in with the history of contemporary art because the color wheel was how artists around the world learned how to mix colors. Also, people get dreamcatchers tattooed on themselves in the modern world. One of my influences in the art world is Frida Kahlo. She’s an artist that I really paid attention to, so when I do do an art project, I compare my art to hers. I feel that this was portrayed in my dreamcatcher.

I think my art doesn’t fit into my group of art projects because I’ve never worked on something with so many components and room for error. All of my other projects were simple. A new technique I learned from this project was how to mix colors to make new and mix colors that aren’t into a new but are met at the middle (ex. Yellow-green and blue). Overall, this project was a success and I learned new techniques and a little bit about the history of color mixing.