Posted by Jailyn Pope-Thomas in Senior Capstone · Reed · ILP/TFI/CAP on Monday, May 20, 2019 at 6:46 am
For my capstone my partner Jhalil Allen and I thought that we should host a sports ceremony for the student athletes here at SLA Beeber. The reason why we chose to do a sports ceremony is because we wanted to have all the athletes be recognized for their hard work and dedication because both me and Jhalil are both athletes and we know how it feels when the hard work and dedication that you put in all year isn't recognized. In our process we had to do a lot of planning ahead so that the ceremony could go smoothly without any mishaps. We had to make our own flyers for the event which we posted up around the school and posted it on our social media accounts, we had to check with Ms. Aziz to see if the auditorium was available for us to use for 30 minutes and then we had to talk to multiple coaches and players in each respected sport so that we could figure out what student athlete deserves what certificate we were giving out (MVP, Most Improved and Most Team Spirit). In the end we had an 'okay' turnout there wasn't as many student athletes there as we would like but some still showed up and that's all that matters. During this process we learned organization skills and also how to promote and create events.
https://docs.google.com/presentation/d/1AInFDD8UhNZXeyqKtRU50k0yqVK0oyvh1qIut9JPJ0s/edit?usp=sharing
Posted by Jailyn Pope-Thomas in Botany · Aziz · y1 on Monday, March 18, 2019 at 11:42 pm
https://docs.google.com/presentation/d/1DEx3Gp6D71o7Q5bSA_OfHXKMw0N9f0bH5ifSyCr3CuE/edit?usp=sharing
Posted by Jailyn Pope-Thomas in Botany · Aziz · y1 on Monday, October 22, 2018 at 3:16 pm
The way that indigenous plants and the culture be preserved as a whole is by having more classes teach these kind of things. This information can be shared amongst students at the grade level of 5th grade and could teach it again in sophomore year of high school. There could be special schools days where they acknowledge indigenous culture and spend a day or however long they want to spend celebrating and cultivating that culture. Plant anatomy affects plant physiology because plants need to be structurally strong so that it can do certain features; a plant that thrives in rainy conditions and is built for humid areas such as the rainforest isn't going to work the same if it was suddenly put in a environment like a desert, it wouldn’t survive. Humans interactions affects a plants ability to adapt to changing climates if it’s a plant that is always in a constant environment. If a plant is always being nurtured by having constant light and being given water at certain times throughout the day the plant will never have to experience a drought of water or sometimes not seeing the sun. Since the plant is in a constant environment it will always know only that constant.
Posted by Jailyn Pope-Thomas on Tuesday, October 16, 2018 at 10:11 am

My Love For Sneaks

A young GOAT at UNC

Would soon become who we all wanted to be

Bred, Royals, Top 3’s, Homage to CHI and all

My first pair AJ1’s started it all

My love for sneakers will forever last

And if you ask me why

The truth is I can't decide

It’s only been a week

And I already scruffed em

I’m starting to make them weak

This is not a good look

I love them unreasonably

But it’s time for em to go

This will be a hard goodbye

Taking them out my rotation

Why this gotta happen to me?

I have a master an evil kind

It totally controls my body, soul, and mind

At first it was fun and joyful

But soon I became a fool

It took my life in just a glance

Thanks to it I am now someone I hate

I used to have a life and it was somewhat great

Now all I do is stack

And then lie in bed

I can't get rid of it

Overall goal: Present and explain the evolution of your organ system through comparative anatomy

Fish were the first creatures with the trait of bony skeletons and which we originated from. Although exoskeletons were thought to arise exclusively from the neural crest, recent experiments in teleosts have shown that exoskeletons in the trunk are mesodermal in origin. “Recent developmental studies suggest that the boundary between neural crest- and mesoderm-derived bones may not be consistent throughout evolution”. Also, the vertebrate skeletal system is well suited to biomechanical analyses, allowing both morphological and functional transitions throughout evolution to be reconstructed . “Before the concept of evolution was established, two distinct types of bones were recognized in vertebrate skeletons and were thought to reflect their embryonic development” and  whether the bone came from a cartilaginous precursor or not. From the POV of comparing morphology and paleontology, it has been said that two lineages of skeletal systems the endoskeleton and exoskeleton have succeeded in vertebrate evolution .

I organized it this way because I couldn’t insert a Venn diagram so, I used the video as a example and this Venn Diagram is what I made 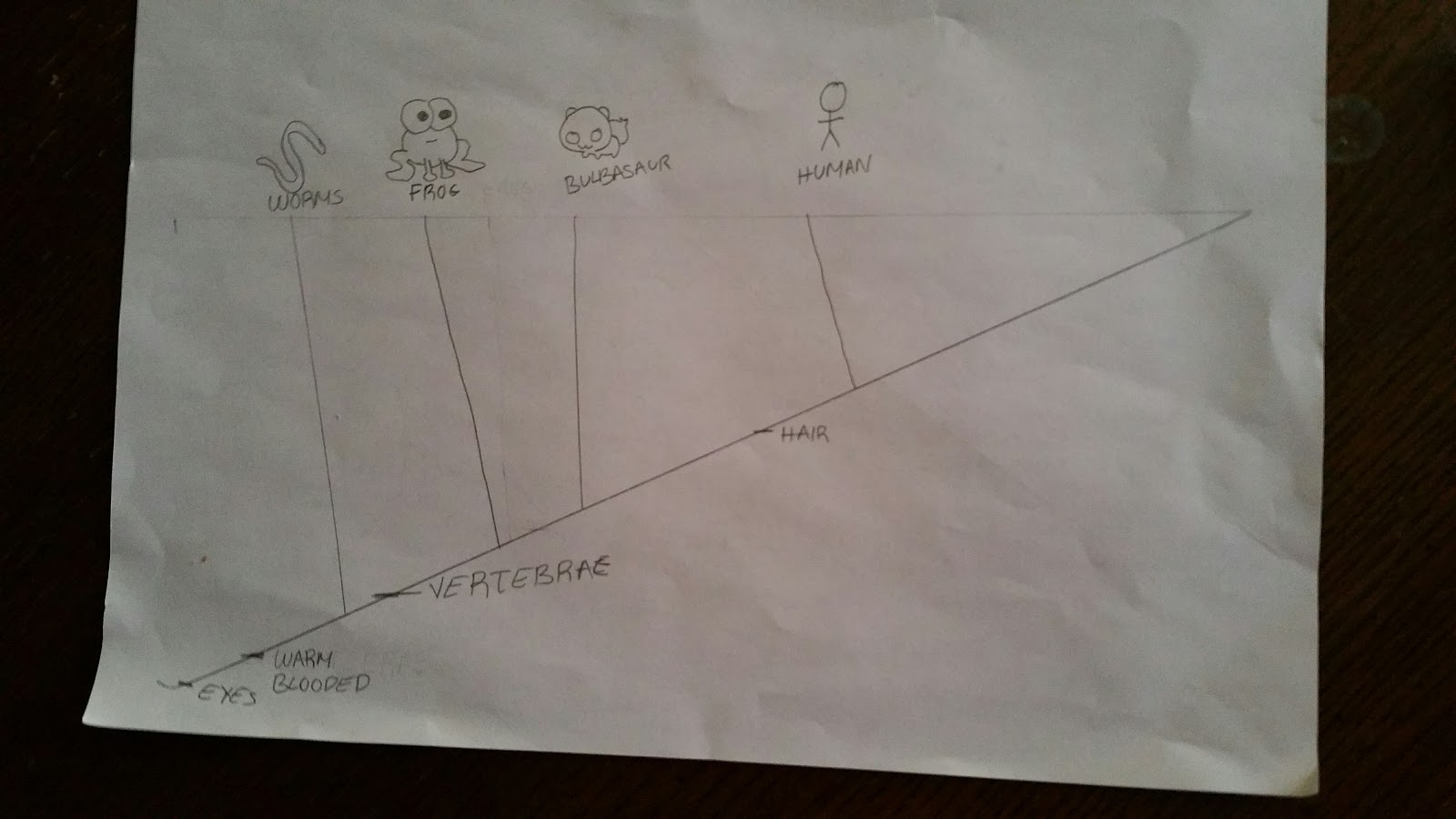 Posted by Jailyn Pope-Thomas on Monday, January 22, 2018 at 9:19 pm
I want this piece of art show that I can really draw if I really put my mind to it. I used pencils to draw the outline of my drawings and I used different types of pencils so that I could shade my stil life to make it look more realistic. Compared to the self portrait that I drew in the first quarter for this class I think I improved a lot considering the fact that it looked like a elementary kid could draw it and now it looks a lot more professional in my opinion. I learned how to shade piece in a drawing to make them look realistic. I am most proud how my work came out I didn’t think I was going to be able to draw the two fruits as nicely as I did. If I could change one thing of this project is the detail I would want to make it as realistic as possible which I don’t think I accomplished.
Posted by Jailyn Pope-Thomas in Art 1 · Hertz · d1 on Thursday, November 2, 2017 at 10:13 am
I drew my uncle Howard whose nickname is Spoogie. I chose to draw him because he is a very important person to me and I feel like he is a very admirable adult. I used paper and color pencils to color the artwork. I started out with my outline then I started coloring in the face and adding details and coloring the background. I learned how to color and make a self portrait through this project since this time I really had to draw. Beforehand, for an art project, I would just make a stick figure or anything and just call it, “art”.
Posted by Jailyn Pope-Thomas in ART 9 - Hertz - a2 on Monday, June 13, 2016 at 2:38 am
My six word memoir was Jailyn Pope no Francis nor Thomas.
This was my six word memoir because, a lot of kids at SLA call me by my last name Pope and sometimes makes jokes about it by calling me Pope Francis sometimes which I don't understand since that's his title not his actual name. The reason why I said nor Thomas because somebody was named the Pope who was named Thomas and it's also the second half of my last name which is my father's last name. I said nor Thomas because, I don't want it to be connected to my name.
Posted by Jailyn Pope-Thomas in ART 9 - Hertz - a2 on Tuesday, May 3, 2016 at 9:46 am
​The meaning behind the art that I've created is that I really like my last name and everybody at this school calls me by my last name more than my first name. Nothing really inspired me I liked the way it looked so I drew it that way. The reason I chose the spot I chose is because I wanted to be the first thing you see leaving the third floor just because. My perception of art didn't change it still is the same. It has made me think of why the artist put it there and there's a certain reason why they did so.
Posted by Jailyn Pope-Thomas on Wednesday, November 18, 2015 at 11:40 am

1: I am usually myself when I’m online unless I’m just joking around with my friends and we make fake accounts on websites because we’re bored which is very rare.

2: I don’t know how people perceive me by checking out my Snapchat, Instagram, and Facebook I hope respectful, intriguing, and funny.

3: I usually consider who’s going to be viewing my Snapchat like one of my family members or maybe one of my friends. I also check if anything I post online could be offensive to anybody viewing it or to myself.

4: The pros are you get to express yourself in anyway that you want and also get to share whatever pleases your mind while the con is being judged for whatever you post positive or negative.

5: They could make you do something rash and impulsive that you will probably regret later like posting something that’s rude to somebody or anything like what happened to those people that posted those things on twitter and lost their jobs because they said some very offensive things

7. Free speech is being able to say what you want to say freely.

12. Three tips to help somebody get through the internet would be 1. be careful what you post 2. always be aware of the long term and short term of posting what you are posting 3. whatever you post can be a positive and negative