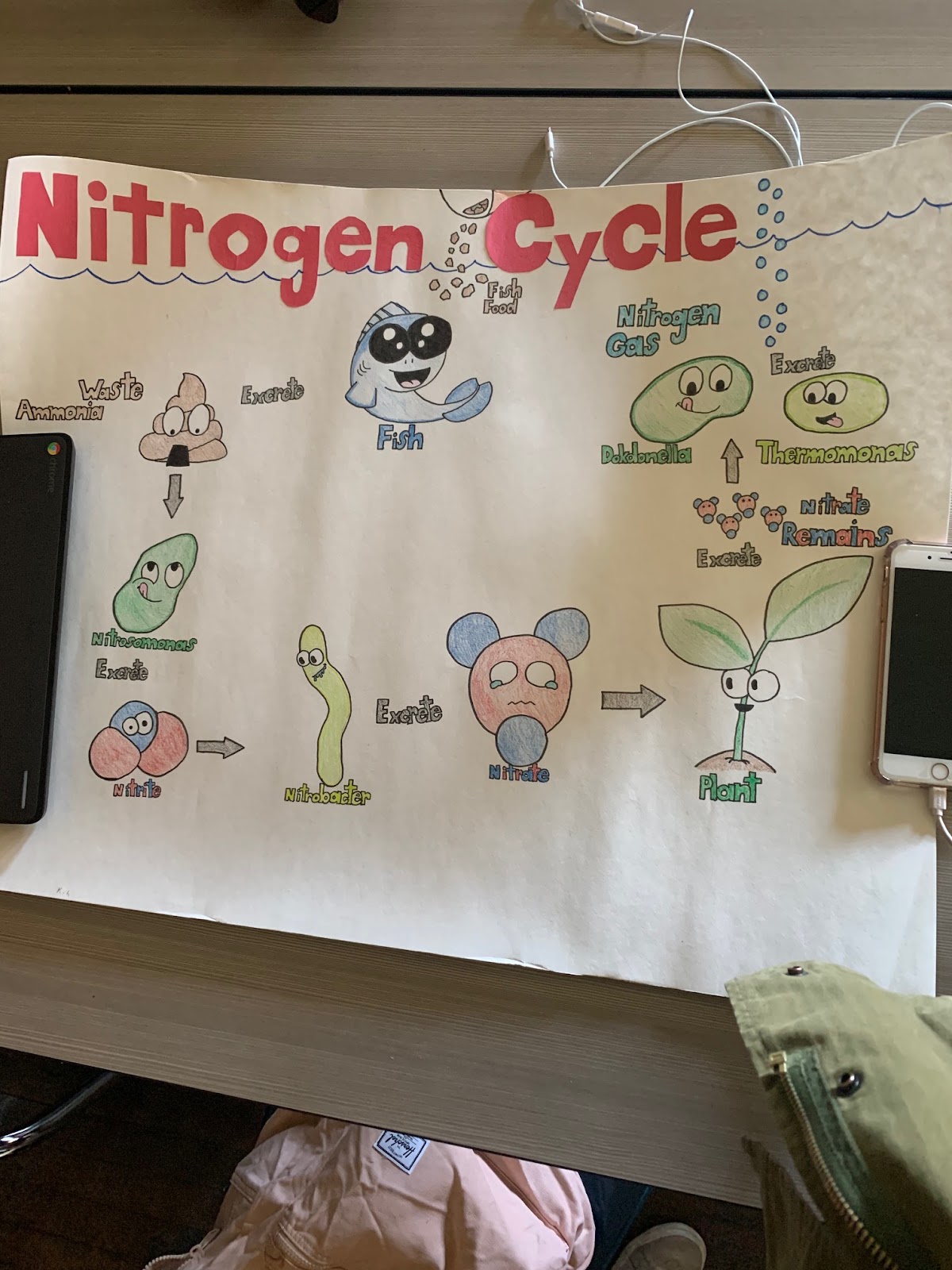 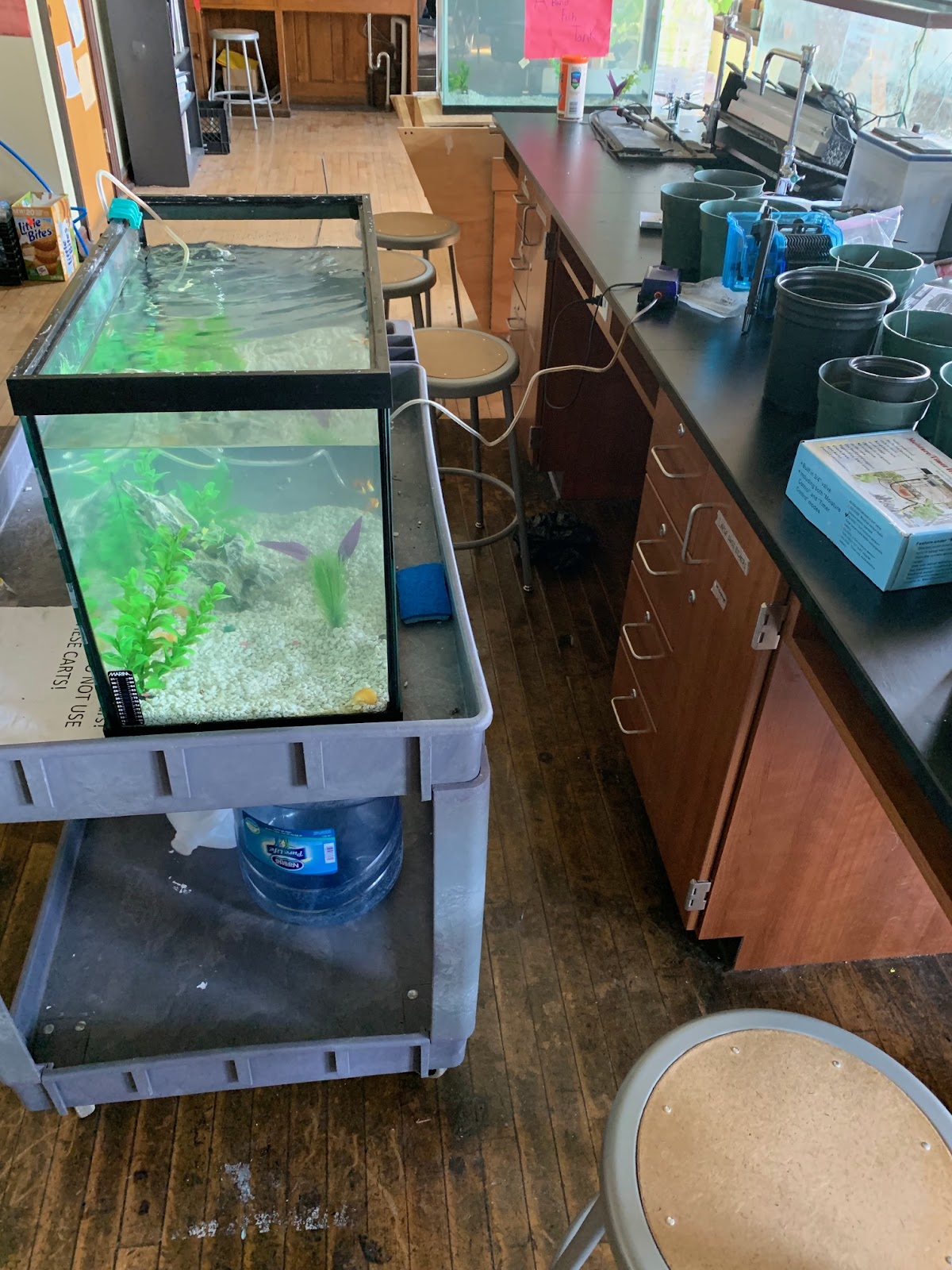 My responsibility was to design a poster that explains the Nitrogen Cycle of Aquaponics, specifically how fish poop helps feed plants without harming the fish at the same time. It starts off with fish eating food and then excreting waste (aka poop). In the process that waste is eaten by nitrosomonas and excreted into nitrites. Next, nitrobacter eats the nitrite and excretes it into nitrate. Then, plants eat the nitrates and any leftovers are eaten by dokdonela and thermomonas. Finally, dokdonela and thermomonas excretes the leftovers into nitrogen gas (aka water bubbles), which float out of the water's surface.
Instruction manual
https://docs.google.com/document/d/1c1VdeQuqzNsY8Dlh6sKJ4Klk74LZ09g-VuP8-9cpDaw/edit
Magazine
https://www.canva.com/design/DADZjCYNMtc/x8GCDcRZBdtxJLrjuemn7Q/view?utm_content=DADZjCYNMtc&utm_campaign=designshare&utm_medium=link&utm_source=sharebutton#5
Posted by Kasai Lamartiniere in Biochemistry 2 · Aziz · B on Wednesday, January 9, 2019 at 10:55 pm
Posted by Kasai Lamartiniere in Technology- Freshmen · Hertz · e2 on Wednesday, December 14, 2016 at 10:56 am

1. internet has changed communication by giving people the ability to have freedom of speech and express their opinions to others freely. However some people think that this also means that they can say and get away with ANYTHING such as cyberbullying and trolling. An example could be of people expressing their opinions on race while others might take as an opportunity to be racist.

2. Immediacy is to be involved in something, permanence is to be forever lasting and never removeable and lack of control is by the name states to loose control over something or a situation. The way these three things affect our lives  are sort of in a pattern. It starts of with permanence when you put something unnecessary or inappropriate over the internet. Next, is immediacy where people start to find these inappropriate things and pull you and others into an argument of what and why the person did this over the internet. Last, is a lack of control where so many people see what you posted that you eventually start to get hate not just over the internet but in real life as well  after losing control over what you posted.

4. Yes the internet does have rules and while most people generally don't follow them, rules are still rules. An example could be how some places like America having a rule that allows you put people in court for cyber bullying while other places like alaska don't have that rule with them so someone can commit cyberbullying acts and can not be sent to court.

5. Cyberbullying is what happens when you abuse the power of technology and your own intellect and use those two things to harm or hurt others physically or mentally over the internet.

6. One type of cyberbullying is trolling which is when you go out of your way to do nothing more than insult or hurt someone over the internet for no real purpose. Another type is masquerading when you use someone face or name basically conceal yourself within a digital mask and avoid getting caught for heinous acts over the internet.

7. For victims of cyberbullying I recommend ignoring the commits the bullies make since they have no wright to judge you, especially since they don’t even know you. Also, make sure to call in a bystander for help. As for the bullies I recommend for them to stop going out of their way to harm others that they don’t even know and stop acting like cowards. If you want to bully someone do it in person instead of over the internet that will atleast make you look like you're tough enough to go  face to face with the person. If that's not enough to get you to stop than simply remember how rare it is for cyberbullies to escape with their crimes. Most people who bully others over the internet are eventually caught and put to prison so think about that.

8. My top 5 tips for using the internet are to first be aware of scams and hackers. Second, always try to make a good first impression on people. Third, only invite people you know and are familiar with over your social media. Fourth, make all of your internet passwords as convoluted as possible. Last and fifth, don't ever get involved in a situation that could potentially lead to cyber bullying.
Posted by Kasai Lamartiniere in Technology- Freshmen · Hertz · e2 on Friday, November 4, 2016 at 2:26 pm

You will then write a blog post containing the information above and a link to at least one article about the story.

In this story a during April 27, 2016  an innocent seventeen year old boy named

over social media by people who didn’t even know him. This abuse caused Felix to suffer

extreme depression and things didn’t get any better while he was at school either. While at

school he was constantly harassed and abused by other students, even his own fellow

and was even declared to be the most hated kid in the whole school despite his teachers saying he was smart kind and caring. Felix on the other hand thought of himself as a looser and wimp with no guts or self esteem. He  eventually moved to another school only to end up with people who saw his social media to harass and bully him as well. After this his depression started to grow more and more into a mental breakdown until he eventually snapped and decided to take away his own life leaving not only him to die in sadness and grief but also to leave his mother in sadness and grief especially after attending his funeral. In this story you can tell that Felix’s immediacy made him easily vulnerable to cyberbullying. By sharing information with everyone over the internet people were easily able to find flaws and weaknesses within him and were thus able to keep on using the weaknesses against him until he cracked. This caused him to be exposed and bullied by students, classmates and even people who barely even knew him enough to judge him. As for what Felix was being mocked about about, it was a video game. On Ithttp://www.dailymail.co.uk/news/article-3823251/It-began-unkindness-advent-social-media-overwhelming-Mother-s-heartbreaking-letter-bullies-drove-son-kill-not-allowed-play-Call-Duty.html it was said that Felix posted on his Social Media that his mom wouldn’t let him play a violent video game called “Call of Duty: Modern Warfare 2”. This however caused everyone on his social media to maliciously mock him by calling him names such as a loser and a wimp despite him not having any control over what he was allowed to play. Not only that but he eventually had no self control in his own media either. After only a few people found out about the video game he wasn’t allowed to play word quickly got out to dozens, hundreds and eventually even thousands of people and what's worse was that there was nothing he could do to prevent or escape the undeserving consequences he got for this. He was completely trapped in a never ending realm of permanence. No matter where Felix went to forget about and escape his cruel past there were always people who knew about his media and brought up the whole situation again. He had lost complete control over his internet life and Social life because of posting something on the internet that he could never take back or remove especially when over thousands of people found out. The worst part though is that he went through all of this pain and suffering all because of a video game. He was given cruelty just because his parents were being responsible and not letting him play anything violent. This story is one of the main examples about the danger of Social media. When you post something on Social Media it will always stay their and spread. Also, when posting something even as small and harmless as a videogame there will always be people who will try to find a way to use something as small and harmless as that to make you think less of yourself and they'll always keep on trying push you more and more until you end up making the same mistake Felix made and sometimes it’s only when that person results to such a hasty action when  people mocking them finally realize the horrible mistake they have made only for it to be too late.