I have noticed that teenagers around my age like to drink caffeine in bulk amounts but do not know the consequences. As you may not know, 32 mg to 200mg act as a minor stimulant and anything over 300 mg causes temporary insomnia. Personally, I don't drink caffeine to that extent, if anything I barely drink anything that contains caffeine.

Moving on, I wanted to understand the effects of caffeine so I have done a study where I personally try to drink steady amounts of caffeine over the course of two days.

The way I collected my information for this study went like this:

Every time I would drink a caffeinated drink, I would list it, add how much caffeine is in the drink, and how many hours after 6:00 am from my starting day I drunk the drink.

The first thing I drunk was a Turkey Hill Iced Tea at 8:00 am which consisted of 110 mg. After this, I was very energized and ready to tackle anything. At 12:00 noon, I decided to eat lunch. With my lunch, I also drank a coca cola can which had 34 mg of caffeine. That night I went to bed around 10:00. By the time I went to bed, my caffeine levels had decreased, which allowed me to go to sleep without any issues. The next day, I didn't drink any caffeine in the morning, so around 2:00 pm, I decided to drink an Arizona Iced tea half and half Green Tea Lemonade, which consisted 19 mg of caffeine. Then, two hours after drinking the Arizona half and half, 4:00 pm, I ate a Hershey chocolate bar which consisted of 9 mg. Later that evening, 7:00 pm to be exact, I felt like eating Ben and Jerry's ice cream. The Ben and Jerry's ice cream consisted of 70 mg of caffeine. That night, I was not able to sleep the time I desired because I still had a lot of energy left in me due to all the caffeine I consumed. My graph below shows a piece-wise function that represents my caffeine levels. The reason they decrease is because your caffeine levels decrease 13% after each hour, leaving the 87% behind. 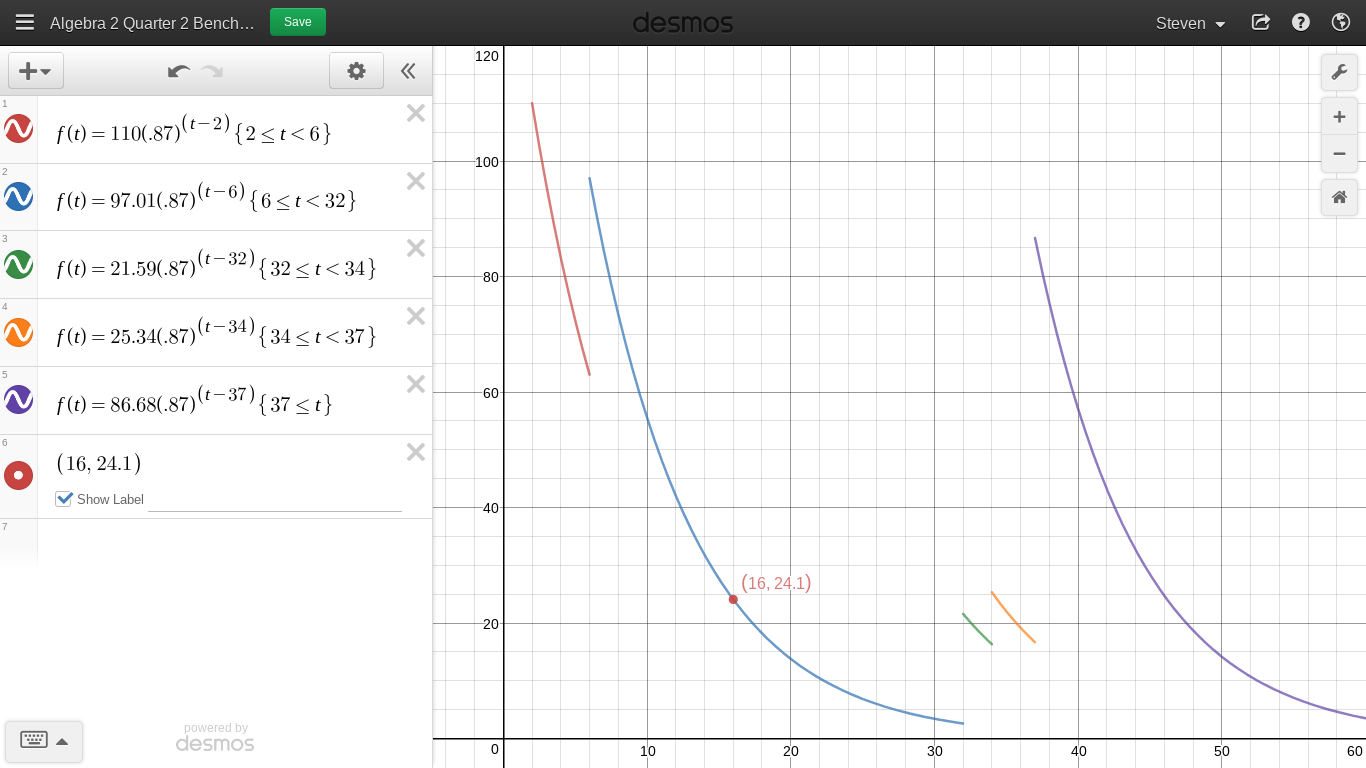 As you can see, my caffeine levels did not go over 120 mg, which was a good thing because anything over 300 mg would have caused me to have temporary insomnia. As you see, the point where the red dot is, that is the time where I went to bed that day. Even though I went to bed, there was still caffeine that was being depleted each hour. The reason that it is (16,24.1) in the graph is because 10:00 pm is 16 hours after my starting point of 6:00 am.

After doing all of my research and collecting my data, I have come to the conclusion that students should not consume any caffeine after 3:00 pm. The reason being is, after 3:00 you become tired and want something that will be a sort of “pick me up”. Most people around my age would go and choose an energy drink and buy them in bulk, so they make sure that they have enough energy for the rest of the day, but they do not understand that their body is not able to get rid off all that caffeine before you go to bed and the fact that more caffeine might be added onto the existing amount does not help the situation.

In summation,  students know how much caffeine you intake! Taking in too much caffeine can cause horrible things like restlessness, irritability, muscle tremors and even temporary insomnia. Also, no caffeine after 3:00 pm! I understand you want a “pick me up” around that time but still, hefty amounts of caffeine should not be consumed at that time. This is only because your body cannot break down the caffeine in time for you to go to bed, causing lack of sleep, which is priceless for us teenagers.

I chose the DNA double helix because it shows the most interesting part of me. I was inspired by my favorite biologist, Francis Crick, who along with James Watson Maurice Wilkins and Rosalind Franklin had discovered DNA, and my favorite artist, Spencer Shay from ICarly. As a kid I found Deoxyribonucleic acid, DNA, the coolest thing in the world because it allowed organisms to develop, survive, and reproduce without having worries. If I wasn't introduced to the double helix as a child, I might have never wanted to learn more and more about science! Anyways, I love science, and I can't say that enough! Science showed me how photosynthesis works all the way up to the genetic makeup of a horse and all the way up to the voltage of an object, and it keeps going. Science even opened a door to understanding math easier, and this all happened because I took the time as a kid to understand what DNA was.

Posted by Steven Zafiris in FreshmenArt on Friday, May 12, 2017 at 2:11 pm
Mike has just turned 19,and he is moving away for college.He brought the essentials with him and thought that he would go shopping when he got to college.Since its a private college you had the option of paying for a single dorm room,so Mike lives alone.At the airport,he saw a picture frame that lights up,so he decided to buy that for his new room. Once he got to his destination, he hopped off the plane. In the airport there was an item store,so he went inside and bought a nice bought a nice notebook with his college insignia on it. He hopped in the cab, with everything he brought him and moved in. His room was average,had a kitchen,living room,bathroom,and bedroom. He had brought with him his prized possession from home, a small water,vinegar tornado maker. He had bought it from his favorite museum,the Smithsonian.His Living room already had a tv inside and a fancy couch. The floor tiles were marble and the door had a polished wooden tint. There was a poster in the background that had the college insignia on it too!
Posted by Steven Zafiris in Physics · Gray · A on Wednesday, March 22, 2017 at 10:40 am
These are the videos for my Physics benchmark, hope you all enjoy!
Posted by Steven Zafiris in Technology- Freshmen · Hertz · e1 on Tuesday, December 13, 2016 at 8:50 am

Slide 2:Then And Now

Internet changed because back then it was only a reading source and now it it a place where you can post almost anything and anything can be viewed. An example of this is how back then a website would be used as reading source but now can  edit things, posts your ideas and emotions,just with a click of a button.

Permanence is based of of lack of control because since it reposted it can't be forgotten and you can search up the thing that was once posted.  An example of permanence is how funny pictures are posted and can be found easily, even after deletion.

Slide 6: How it affects us?

All of these things can affect anyone because now every small thing you do on social media will impact the rest of your life,offline and online. What I mean is how if you impersonate another person and get caught for it, now you will be remembered by that.

One way you can actively protect yourself is by locking your account so only your friends,followers, etc.,can see what you posted. Another way to protect your identity is to not post may pictures of yourself so people can't use identity theft on you.

Slide 8: Does internet have rules

No,it's only the websites on the internet that does have rules, One example of this is how you would search up something and the internet won't block you out of it.

I specifcally focused on two.One is trolling,it’s when you intentionally hurt another person's feeling and do it over and over again. And impersonations is when you make yourself look like another person so you can ruin their reputation.

Slide 11: Advice for everyone

Victims,don't wait for things to just suddenly end, tell someone. Bullies take into consideration that what you're doing is not cool. Bystanders, do something than just watch everything go downhill.

Posted by Steven Zafiris in English 1 · Bentum · D on Friday, December 2, 2016 at 1:51 pm
Creativity while learning is when you make something, that started as a single thought, and later on you make it a reality . In my eyes creativity is when you use your imagination to see what you can do, while incorporating the knowledge you have in a fun and entertaining way. When you learn in a more creative and fun way, you are more likely going to become interested and want to take part in the project,worksheet, etc.. If you learn in a blank and plain space you most likely won't care and wouldn't bother to do the project, worksheet etc. Also, creativity is also when you spread your ideas or beliefs in a very fun and unpressurized way, so you don't feel like you are being forced to learn.
Posted by Steven Zafiris in Technology- Freshmen · Hertz · e1 on Thursday, November 3, 2016 at 1:03 pm

While searching for a topic to focus on, I came across Donald Trump's tweets. I looked over his twitter page and mostly found rude tweets that mostly involved politicians, like President Obama and Secretary Clinton. Some tweets talked about how President Obama unfit for President and other tweets involved Trump talking about how Barack Obama is not born in America. Other tweets offended Hillary Clinton. The type of tweets I focused on were the ones that involved him talking about President Obama's birth certificate . I used Google and searched up Trumps Twitter Archive.com and I scrolled down to tweets on President Barack Obama. I looked over all of the tweets that were listed there and most of them talked about how President Obama was not born in the U.S because Trump thinks that he was born in Kenya . An example of one of his tweets was  “Let's take a closer look at that birth certificate. @Barack Obama was described in 2003 as being "born in Kenya.” This tweet impacted him since he pursued with this lie and most of his supporters know that President Barack Obama is from Honolulu, Hawaii. His supporters might have noticed later on that, since that is a lie he told to people, and he believes in it so strongly, that maybe that isn't the only lie he made up,so he lost supporters due to this fact. Since Donald Trump is famous, all three things, Immediacy, Lack of control and Permanence, affected him in a bad way. Immediacy affects him because once he hits the post button, millions of people can see what he just thought of, or how he is feeling at the time. Lack of control affects him because now people can screenshot his tweet and repost it to spread rumors how he is not a good candidate. Permanence affects him because now, you could search up ¨Donald Trump rude Obama tweets” and millions of pages would come up due to the lack of control. I would tell Donald to keep his unnecessary tweets to himself because they can not be backed up with sufficient information and because thats rude. 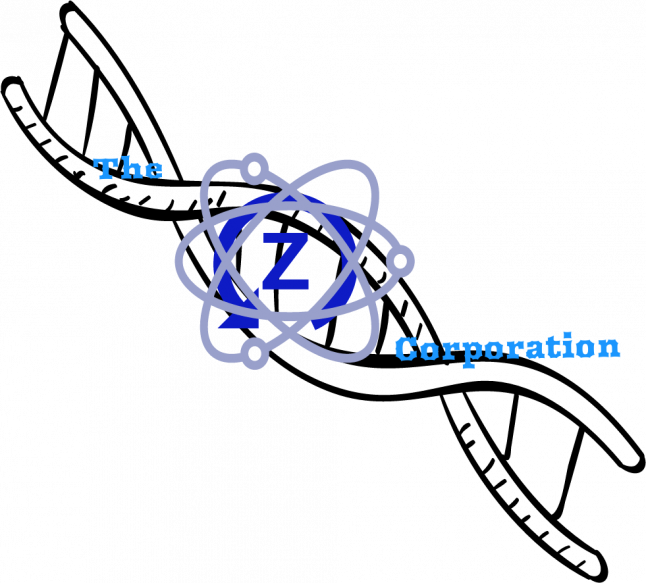