Posted by Mary Hertz in ART 9 - Hertz - a1 on Monday, April 25, 2016 at 10:30 am
My piece was inspired by the children's books that I read with my son. I wanted to create something that felt whimsical and imaginative.
I chose the location I did because I wanted it to look as though the insect was lounging in  a corner and I wanted it to be near my room.
I have been paying attention to the different styles of illustration in children's books and have really been thinking about how under-appreciated some children's book art is. I also thought about how an image can transport the viewer and also pique a viewer's interest in finding out more of the story. I like to imagine that there is a story being told in my drawing.
I am now paying attention to the varied styles of street art and I think more about the purpose behind the art that I see and the characters that artists create, similar to how children's book illustrators have to think about the characters that they are illustrating.
Posted by Kashawn Gilmore in ART 9 - Hertz - a1 on Monday, June 13, 2016 at 6:32 pm
I drew this picture showing a room that only allow hard work in. As you can see the sun in the window it shows the room is bright. This relate to me as a bright person you should always work hard and never give up. Also a bright future to someone who has big dreams.
Posted by Anthony Walker-Wardlaw in ART 9 - Hertz - a1 on Monday, June 13, 2016 at 9:15 am

I wrote this because I feel like it represents where I’m at in life, I am a very analytical, introverted person, but those kinds of people don’t do well in social places, so I’ve been making an effort to Talk More, Think Less.

All for one, One for all

My back story is when me and my friends need help with something we all help each other and try to help them and find a solution to the problem. We never like to see each other in a hard time so we try as much as we can to get them through it. That's why my 6 words are All for one, One for all cause we all help each other to become one. In my drawing I put pictures of people on the wall to represent my friends. I also choose to put a lot seats cause their is where me and my friends seat to talk about our problems.

Sierra Harvey
Posted by Cindy Perez-Nieto in ART 9 - Hertz - a1 on Monday, June 13, 2016 at 8:35 am
'​Eat alot of candy and die' is my six word memoir. This connects to my artwork because in my room there is candy on the table and most of the things there is drawn as a piece of candy. This is to show my obsession over candy and how much I love candy but there is consequence of eating a lot of candy. You can die. When I was a kid I would eat a lot of candy and my mom tried hiding the candy. I always ended up finding the hiding spot. My mom had stop buying candy but my older cousin would buy me candy. One day my mom told me if I kept on eating candy I would die. I believed her at the time because I was a child.
Posted by Colin Chobert in ART 9 - Hertz - a1 on Monday, June 13, 2016 at 8:10 am
Feeling nostalgic like a Polaroid picture
I wanted to make a room for a character that is in love with the time between the 60's and 90's. This character has a very simplistic room that only has a few items that are very important to this character. These items are a record collection, an old Polaroid camera, and some posters of their favorite bands. This character would be an introverted teenager that likes material items more than other people.
Posted by Raquel Singleton-Wright in ART 9 - Hertz - a1 on Saturday, June 11, 2016 at 11:48 am
"I'm cracking up. I'm cracking up."
My backstory to this is I say this a lot and everyone knows that I say this for different meanings. For example, I say I'm cracking up to when things are really funny and to things that I think is annoying. I also say this to express how I feel about certain things. My 6 word memoir connects to my room because it shows that I am watching television and it shows me and my life when I'm saying, "I'm cracking up." One experience that illustrates how I arrived at the memoir is when I realized that I had to think of something that resembles my life I thought of something that I say a lot to every situation in my life which is, "I'm cracking up. I'm cracking up."
Posted by Sanai Stafford in ART 9 - Hertz - a1 on Saturday, June 11, 2016 at 11:01 am

In the beginning of this year I was going through a lot,like losing my grandmother and cousin back to back.But even though there were hard times I still had friends and family who were there for me and still are.Even when the good and bad things happen don’t let it stop you because LIFE STILL GOES ON.And that’s what I had to learn.The pictures in my drawing represents friends and family in my life.
Posted by Fatima Bamba in ART 9 - Hertz - a1 on Friday, June 10, 2016 at 11:18 am

"I can never get it right"

I chose this because I can relate to it the most in some ways. When I learn a new lesson in Algebra class and I try to solve the problem I never get it right I end up getting the wrong a
Posted by Imani Gonzalez in ART 9 - Hertz - a1 on Thursday, June 9, 2016 at 1:21 pm

I found myself through beautiful music. 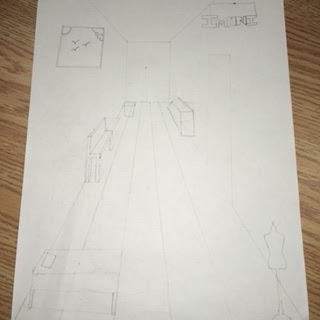 As I drew this I realized the connection between my six word memoir. I chose this memoir not to say I learned who I truly was through physical music but there are things of art I found myself through. I know growing up I loved the comfortable environmental setting and I always loved fashion. All of these things are included because I love nature and I love my sleep too.

I come from a mix of two different cultures. My mom's side is from Philadelphia Pa and my fathers side is from Sierra Leone. I said same meaning because family is family and I feel the love and care from both sides is the same.

I have two different kinds of foods in my room because it symbolizes “African Culture” food and  the other symbolizes “american food” Also in my room there is an African American Award on the entertainment system to show accomplishments.