Posted by Terrance Johnson in Senior Capstone · Rosen-Long · ILP/TFI/CAP on Sunday, May 19, 2019 at 3:31 pm
For my capstone, me and Alexander decided that we wanted to build upon the already existing bike room. The bike room had been a place that BCYC (Bicycle Coalition of Greater Philadelphia) stored their bikes for the duration of the spring. Yet the room is so much more than that so we took it into our own hands. By allowing people to visit the room we can both show them how to fix bike related issues and give them a place to relax. Fixing bikes is sometimes a hard thing to do and some places charge insanely high prices, but in the Bike Lab, we won't charge a dime. Plus we'll teach you just nearly everything you need to know about fixing a bike. Alongside learning about bikes we also offer people the chance to be apart of BCYC. BCYC will teach you many bike related skills as well as the chance to meet new people. The Bike Lab will be open during lunch and after school. During my time both being a member of BCYC and creating this capstone I've learned what it's like to plant the seed so that others may make it grow. I had no involvement in the room the previous year when the seniors had put the room together, but I can understand that they were also doing this same thing as I am now.  So as a little treat we decided that our showcase would be a mock sprint. I would be the model for this sprint with a speed of 46 kpm (28.3 mph). We then placed people based on there top speed and ranked them first, second. and third. Those who placed in those sections would receive a treat. Sadly none of the people were able to beat my top speed. Still, this was only to give people a little task of what it's like to be a cyclist.
Posted by Terrance Johnson in Biology of the Human Body · Aziz · E on Monday, April 15, 2019 at 10:54 pm
For our project, we as a group decide to talk about the eyes from a public health stand point. We gained some general knowledge on eye care and public health through research but that information wasn't enough. So as a result we planed to interview Ms. Rachel Bishop. She is an ophthalmologist and she was able to answer the questions we had prepped. Now, in my group I did do some research and for the interview I was there helping record it. Outside of that I wish I were able to get in contact with my ophthalmologist. As for the meaningful part of the project, it would have to be the fact that people who could see the video would be able to understand that Eye care is a very important subject when it come to the mater of public health.
Video: https://youtu.be/VOe0EIiNI8I
Posted by Terrance Johnson in Biology of the Human Body · Aziz · E on Wednesday, March 20, 2019 at 10:45 am
Posted by Terrance Johnson in Biology of the Human Body · Aziz · E on Wednesday, February 13, 2019 at 11:30 pm
Posted by Terrance Johnson in Biochemistry 2 Honors on Wednesday, April 4, 2018 at 10:22 pm 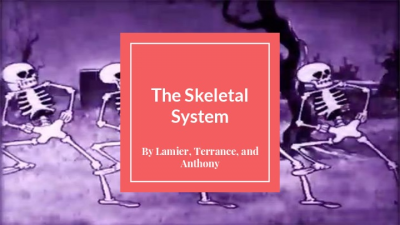 Posted by Terrance Johnson in Seminar Junior · Rosen-Long · adv on Thursday, November 2, 2017 at 3:35 pm
Posted by Terrance Johnson in Intro to Design and Multimedia on Friday, May 26, 2017 at 8:54 am
​Q-1 Project
So what my Q1 project was is that we were supposed to create a website and add information about us to it. The overall goal of the website is to be able to add any information on further projects ahead of where we were at the time.
This project to me was a very good I believe that I did pretty ok on it other than my grammar.
Q-2 project
So the project that I did was the computer science crouse.
My vision and goals were to figure out how people can code and how can I learn to code things which would allow for me to do various things like moving keral around.
To me, I believe that it was a success because It got me closer to being able to understand other coding languages with ease.
Q-3 project
This project was the 3d modeling project.
During this project what I wanted to do is make a model of what I like so I went with the idea to remake a really fun meme.
This was a success but I feel like I could have done better with this instead of making those number all over the place instead of being just stationary.
Quarter - 4 Revision
I went back to the website I used for the computer science/coding to finish some lessons that I didn't finish before. What I did was I went back in and changed the way some of the lines of codes were and made a few adjustments to some of the lines of code so that they can work for both situation.
My experience:
I believe that My highpoint was during the second quarters when I did the coding project I believe that during this time I gained the knowledge that I needed to know how to understand coding languages.
An area of growth for you
It may have been during my time of 3-D modeling project \, it allowed for me to be able to get an idea of what I may want to do during the future.
How you have used or could use a skill or technique you learned this year outside of this class
For the coding project, It allowed for me to understand certain lines of code due to my time while doing the second quarter project.
An idea you want to pitch for a project for next year's class
Let people make memes that are funny and clean.
3 tips for anyone taking this class
Take your time with the projects.
Have fun with the project
Finish your work on time.
Posted by Terrance Johnson in Intro to Design and Multimedia on Tuesday, January 17, 2017 at 1:07 pm
​

My project that I chose to do for Q2 is computer sciences. So basically what we did was to do some of the most basic coding using the kernel program. What that is to explain it is a dog that move on a grid and throughout the entire lessons that I did taught me to do things like move around pick things up make it simpler for me to do an action instead of having to write out a very long codes for something that can be solved very easily. Something that I had a problem with in this project is that during some of the lessons I had to figure out what to do for mobile worlds but I couldn’t quite figure out what I needed to do until I got to the lesson that explained what I had to do. If I were to give anyone any type of advice on this I would say that you should alway try to talk to people who are also doing what you are. Don't worry you will be able to work on it later and also later lesson will help you to complete the lesson that you have problems with. So have fun with it is all I am trying to say and never give up. Terrance out M8's.

part-1
https://www.youtube.com/watch?v=u7L1y7fkbeA
part-2
https://www.youtube.com/watch?v=LvhkXDJ7KHs
Posted by Terrance Johnson in Intro to Design and Multimedia on Tuesday, November 1, 2016 at 1:38 pm
​My project was the history of gaming and I also like gaming so I thought that I would mix it with my history so far. I hope that people will come to my site that it. Something that I learned while going through the process of making my website is how to link and give credit to those whose work that I have used to show certain some history of how gaming came to be. I started off my site by giving little information about  myself which could lead people to want to know about me and after that, I started to give some facts about why people play games. During the process of my project, I noticed that in some areas I may have seen that I made little mistakes such as not spelling some words right and not upper casing my I and little things like that. Also, I encountered that some things like having to get rid of things that I liked to better inform people about me ,but I think that it was worth it. One thing that I ended up learning was that I have to make it clear for whoever may be visiting my site what I am trying to show when they see the home page so for me my topic was gaming so at the start I showed using an image that it is going to be about games. I learned that it is ok for me to talk about things that other people have a similar interest in. So something I thought about while doing this project is that I would change it but why it's because there are some things that I wanted to add but either didn't have enough spaces or disregarded what I was thinking. If you are going to make a website I think that your should really plan out on what you're going to do because if you don't and you go in and try to do some things but then change your mind you may have to either start over or take some stuff out. Well, the thing that gave me the idea is the fact that I love playing games and I thought to myself what if I just make it about games because I enjoy games and so do most other people. For citation, I gave all credit where it was due for both the videos.
website link: http://laboi.weebly.com